I began Randoneurring in April, when I completed my first brevet. The Schuylkill to Delaware permanent would be my sixth Randoneurring event in as many months. Although I've already signed up for the 400K from Bremeton, Washington, to Pacific City, Oregon, that's taking place at the end of September, I've never ridden that far before and will be using a rented bike, so I  wanted to have a 200K in the bank, to preserve my Quixotic run at an R-12 award, just in case.

The 400K will start at midnight. I decided to start the 200K at the same time and see what its like to start a ride that early or that late. 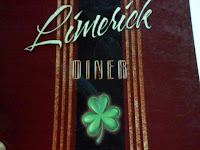 The first control was the Limerick Diner, open 24 hours. After parking, and loading the bike, I walked in, stopped, turned around and walked back out to get the Brevet card from the bike.  Then back in. The diner had customers at the counter. Seems like 24 hour diners always have customers. I wonder if its the same few guys like maybe they rotate through.

Already full from the pre-ride meal of oatmeal doused with ensure plus that I had at home and bumping up against my start time, I scanned the menu for something quick and easy. OJ and an English muffin fit the bill. When the waiter brought out the muffin, dripping with melted butter <yum> I asked if he could fill out the brevet card even as I once again thought I need a better way to explain to folks what I'm doing . . . He was happy to oblige and mentioned that he also rides, then his eyes widened as he looked at the destinations and distances on the card. He added "but not that far." 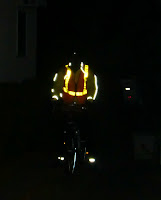 I left the diner and began turning on my lights. My night riding outfit could be used to land planes. I call it my supersuit. I wore an orange  mesh vest with wide yellow reflective bands  over a yellow jacket with reflective piping. On my wrists, like bracelets you would see on Wonder Woman or old school Luke Cage comics,  were yellow RUSA ankle reflectors, on my ankles were another set of ankle reflectors. 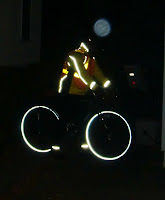 And then there were the lights.

My helmet had a headlamp zip tied to the front. There was a red blinky clipped to Camelbak. Red spokelits on both wheels, a red planet bike superflash on the back and three planet bike headlights, two mounted low the other on the handlebar, in the front. And my Schwalbes have reflective sidewalls. A bit much? Perhaps, but  I was riding solo and I wanted to be sure that no one could say they didn't see me.

I rolled into the moonless night toward a smokey dark purple horizon. Above me, the purple deepened to a blue black backdrop for the dense sprinkling of stars that arced across the sky. As the route moved into farmland, the stars brightened, piercing the darkness with eternal clarity.

Five and half hours till sunrise. Solo night riding proved to be its own challenge. I realized that my normal pacing uses visual clues to allocate effort. Now there were few.Without the benefit of distant sight, the road rose and fell with little warning. Hills began suddenly and I had no idea how long I would climb. Downhills were a balance of speed and not outrunning your lights. An early steep climb proved particularly frustrating since I had not gotten the hang of gear selection based solely on road feel.

Fortunately the route was envisioned as a night ride. As the miles went by, that vision seemed to reveal itself. Downhills ended in gradual runouts instead of brake grabbing turns or high traffic intersections. The roads were were lightly traveled, allowing me to safely ride mid lane for long stretches. Occasional small towns with house lined main streets interspersed the rural darkness with pools of yellow street lights.

After some initial climbs and descents, the course settled into a long mid section of wonderful restorative flat. Rolling along the New Jersey side of the Delaware river, lost time was regained and average pace increased. Quaint riverside tourists towns became picturesque ghost towns for the night. Patches of fog filled low lying fields. A startled deer fled across the road its hooved feet tapping out a retreat down a residential street. Then, four and half hours after the ride began,  the Mona Lisa smile of a crescent moon appeared above the tree line.

The sun rose soon after. The transition from full night to full day is a wonder to behold. Day slides in around the curve of the earth. Stars gracefully exit the stage. The power of the sun makes itself known with rays of warmth and light.

Back in Pennsylvania, the temporal world responded. Temps climbed out of the 40's. Traffic returned. A near dawn stop at the Eagle diner was a welcome break. The same few guys sat at the counter. I refueled with eggs, an English muffin and OJ.   I turned off some of my lights, toned down the supersuit and set out to complete the course. On the road, my pacing fell back into day mode.

The final checkpoint was the Limerick Diner. Now it was busy with brunchers and lunchers and breakfasters and tray balancing waitresses. I realized that the extent of my trip was as hidden from the world as were the stars that filled last night's sky. I took a seat at the counter and had some coffee and an omelet while remembering the passing of the night.