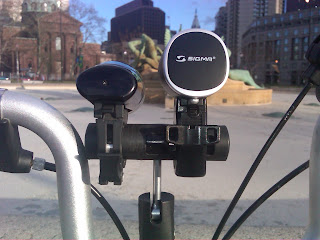 The Sigma Lightster is a potentially significant new option in battery powered commuter bike lights. Generally, commuter lights are used "to be seen" or "to see". A "to be seen" light is the kind of light you can use in a city where streetlights and other ambient lights provide enough light to ride by. It keeps you from becoming a "bike ninja" by making you more visible.  Since the "to be seen" light is mostly used to get you noticed by others, it can be a one bulb blinky or a small light.

If you ride unlit roads, a blinky won't cut it. You need a light that you can actually use to see where you are going.
The  Lightster is advertised as a "to see" light. It retails for about $35.00. What makes it potentially significant is that it is a shaped light. A shaped light is a light that projects a square or rectangle of light instead of a circle. A shaped light has a distinct top line. Like car headlights on low beam, the light is focused on the ground and not into the eyes of oncoming traffic. For the rider, it means that more of the light is used on the road ahead instead of fading off into the distance. This feature means that this light is one of the few battery powered lights that meets German standards for bike lights. Even more importantly, the Lightster is the ONLY shaped light I am aware of that sells for less than $40.00. Other shaped lights cost far more.
The Lightster is also advertised as putting out 20 lux of light for 10 hours. A lux is a measure of light. I understand one lux to be about as bright as the light from a full moon. (if that's not right, feel free to comment)  By comparison, the Ixon, which is a very good  battery powered shaped light, puts out 40 lux for 5 hours or 10 lux for about 20 hours. So the Lightster, contrasted with the Ixon, either provides half the lux for twice the length of time as the Ixon high beam, or twice the lux for half the length of time as the Ixon low beam.  But the Ixon also costs well over $100  - enough to buy almost 3 Lightsters!
I decided to test the Lightster against the Planet Bike Blaze 2 Watt in an under $100 light comparison. The Blaze is a Cree LED commuter light that retails for about $60 dollars. I have used it on overnight rides and it is an acceptable "to see" light for unlit paved roads with no major downhills. For commuting, it is way more than adequate. If the Lightster can hold its own against the Blaze, it's a light worth consideration.
First Look


The Lightster has flat black metallic body with what appear to be aluminum ends. I suspect they act as heat sinks which help keep the LED cooler. It takes 4 AA batteries and comes with Duracell Ultra. You can also buy a rechargeable battery kit and connect the charger directly to the light.
The Lightster has one level of light - ON.
The Blaze has black metallic body with what appear to be an aluminum heat sink mid-body.The Blaze takes 2 AA batteries.
The Blaze has 3 light levels Low, High and "SuperFlash" (Superflash is a mixed intensity strobe that is used "to be seen" It works great for that, but I am not testing that feature in this post) 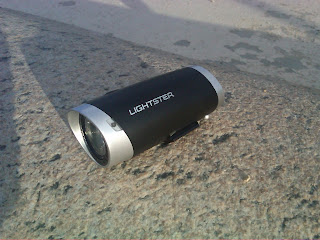 Smaller circumference on the Blaze: 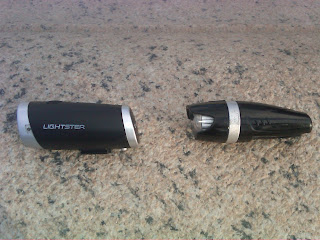 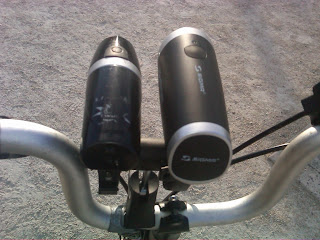 Light Patterns
The following pictures were taken on the same night with the same camera seconds after each other. The images are unretouched. The lights were mounted side by side at the same height at handlebar level. The camera was on a tripod at about eye level for a rider.
A tennis court was used then a dark trail.
First, the tennis court test.
A standard size tennis court was used so that the distances could be appreciated by anyone with access to a tennis court.

In the first series of shots the front hub was directly over the base line and the lights were aligned so that the top edge of the light just touched the top of the net
The Lightster has a much wider coverage area than the Blaze. You can see the left sideline fairly clearly. The light also extended across the full length of the court. However, there was a unlit gap between the front wheel and the lit area. On a paved surface, that gap would not be an issue. It might be a concern on a bad surface. This would make a fine light for flat, paved unlit roads and bike paths, especially if you are riding a bike with wider  tires that can roll over small imperfections.

The Blaze low beam is narrower and dimmer. As a supplement to ambient light it could be enough, but it would not do well as a primary light for riding anything more than a very casual pace on a paved road.
The Blaze high beam is noticeably brighter than the Lightster, but the light is concentrated in a narrower pattern. In this picture you can seen how the light forms an oval on the surface of the court. There is no dark gap between the bike and the light, but the width is narrower. The reach of the light (or throw) is somewhat misleading because the light is positioned slightly down so that the top edge is at the net line. Tilting it up would decrease the light on the ground but increase the distance it reached - kind of like with a flashlight.

In the second series of pictures, the bike was on the sideline and the light was aligned so that the top edge just grazed the top of the wall on the opposite side of the court.
The dark gap of the lightster is evident here at the bottom edge of the frame. In reality the contrast is less, so the dark is less dramatic, but it is noticeable. You can also see the boxy shape of the beam and it equally lights up both sides of the mid court line.


The Blaze on low is still long and narrow.


The Blaze on high is bright. The circular pattern is evident. The trick with this pattern is trying to balance forward light with ground light. Still, this light works for night riding.

Finally, pictures of an unlit trail. Here the top of the light was focused on the fence in the distance.
The lightster has a wide beam and good light over the area. It has the farthest reach as set up. (The camera exaggerates the darkness at the bottom, but there is a gap.)


The Blaze on low shows more of the path, but less distance.


The Blaze on high shows path and distance but less width.


Both lights on is impressive.  You get the best of both. If I use these lights for a real night ride, I will probably bring both and keep this option as a "high beam" for bad roads, downhills or rain.

Test Ride
I tested both lights on a ride to, along and from a bike trail at speeds ranging between 14 - 18 mph. The trail had little ambient light. Under these conditions, the Lightster's wide coverage and shaped beam made for a noticeably better riding light than the Planet bike. Simply put, there was more light where light was needed. I also found that the coverage of the entire trail to provide greater options for line selection.

The Planet bike's strobe option was my choice for traffic roads under streetlights. That strobe demands attention, which is what you want on a city street.

Next up - Burn time and "rain"  testing!

Feel free to post questions, requests or comments about the testing!

Email ThisBlogThis!Share to TwitterShare to FacebookShare to Pinterest
Labels: equipment