Oyster Creek 200K - The calm before the storm.

The Oyster Creek 200K undulates like easy waves on a breeze brushed pond. No significant climbs means no screaming descents but the varying terrain intersperses spin worthy flats with opportunities to rise from the saddle and power over gentle rises. It is a good course to enjoy a fast ride or a merciful one. 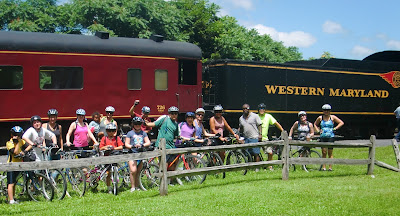 I am the locomotive. Steady chugga chugging up the long long climb from Cumberland Md. to Frostburg, Md. on the Great Allegheny Passage.

The children riding in line behind me, the "cars" of the train, sing a loud and joyful cadence, as only children can, over the soft rolling crunch of the fine gravel path.

My five year old daughter's voice, as pure and as sweet and as precious as the rainbows that slide on the surface of a soap bubble, responds - in a quiet voice tinged with excited expectation - from the trailer that I pull up the hill.

"I think I hear it again"

"Well if its not sister -then I'm not home."

The song doesn't end. The call and response goes in circles, naming each rider, until every car in the train has had his and her turn, or two or three or more turns, as we ascend the long steady hill on a warm Sunday morning in July lifted by song and sharing.
Read more »
9 comments:

First Friday writing for Randos - Easy Does It

{First Friday Writings for Randos - A monthly post that features pieces from other writers that touch some facet of the Randonneuring experience, even if that was not the author's intent. It's stuff that's best read out loud - slowly.} This month it's an excerpt from . . .

By Bill Strickland
Editor at large for Bicycling Magazine

When my bag of jelly beans drops onto the pavement of Dogwood Lane, I almost don’t turn around. We have just a while ago come off Coon ­Hollow, which is a road we would ride for the name alone but as a bonus happens to be smooth dirt packed as hard as any pavement, with such little canopy that the country sky sometimes curves blue and near-feeling from one of earth’s edges to the other, and with a ramshackle mansion of a barn that provokes sadness and wonder each time I pass—though I have been doing so for more than a decade.

Dogwood becomes one of those climbs that at first is barely so then can take your knees off here and there over a couple miles. But that is only after you disappear into its deep shadowed woods. Its bright opening slope sustains the reverie Coon Hollow began, with sunny farmed fields to either side, and split-rail fences gone gray from weather and time, and a rural community ballpark where a great home-run ball could be lost forever in the soy. This is where I am when my jelly beans fall.