Sometimes the road is butter. Sometimes it's crispy fried bacon.

The PA Randonneurs' "Stillwater 200k Retour" began on the banks of the Delaware River in the town of Milford, New Jersey. Milford was once a town with a grist mill and a station on the Belvidere Delaware Railroad. Now long gone, the "Bel Del Railroad" ran a regular passenger line from Manunka Chunk to Trenton. Today, Milford is a town of small shops and restaurants that look like they cater to folks recreating on and near the river or living in the rolling exurbs that border the river. The buildings are neat, quaint and picturesque. 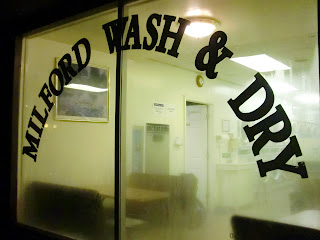 This "retour" would reverse the Stillwater route that the group rode in November. I did not ride that brevet. This would be my first time on this course.  After riding two flat 200k rides in the last two months and pushing hard to two personal best times, riding with the Pa Randonneurs would mean a return to hill country. The elevation profile (click link) showed that the two major climbs appear at the end of the route- just when I would likely be at my weakest. My big goal for the day was to  finish the ride without turning it into a sufferfest.

We met at the Milford Station Bakery, the first controle point for this December ride. From the outside, the one story, yellow stone building  (picture) still looked like a historic railroad depot. Walking in just before dawn, I checked in with Tom R., the ride organizer, and got my brevet card with its list of the four remaining checkpoints that would cover 126 mile route. Inside and out, riders completed their final stages of preparation.

The last bit of night faded into day. The 25 degree windless air settled around the group during  the short pre-ride meeting. At 7 a.m., just after sunrise, we began our ride, easing into the cold morning. In a few minutes, we rode out of the small town and upstream along the edge of the Delaware River. Water cascaded in thin falls to our right and the relentless river flowed on our left. 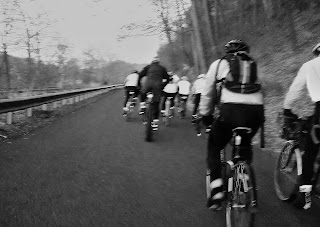 Rick C. rode a fat sand bike with wheels that looked to be three or four inches wide. The  wheels, designed to ride on sand without digging in, audibly buzzed along on the asphalt. Rick's ride choice for the brevet drew comments all around. I took pictures. It looked like he was pedaling a motorless motorcycle. My tires, normally the widest in a group of Randonneurs, looked anorexic skinny by comparison. 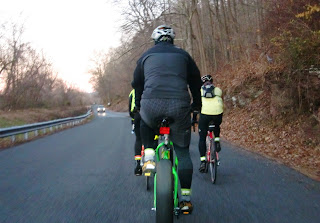 Over the first 73 miles, the route trends up, going from 151 feet to 724 feet. The first thirty miles have three short steepish climbs evenly spaced over the distance. This early in the ride, rested and riding on a full stomach and short mileage, they are nothing major, just an opportunity to warm up but still they sort the group. After the selection occurs, I find myself riding with Len Z. and Doug H.  We ride together, for the most part, to the second control. 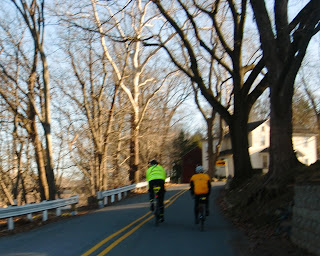 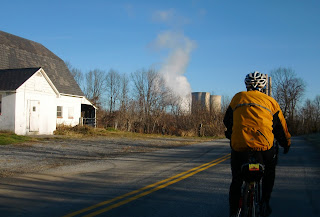 The second control is a Citgo in Portland, Pennsylvania, a bridge town on the Delaware, just north of the coal cooling towers with their wide plumes of white smoke. When Doug immediately removes his shoes after entering the store, I figure he's going to be there for a little while defrosting his toes. 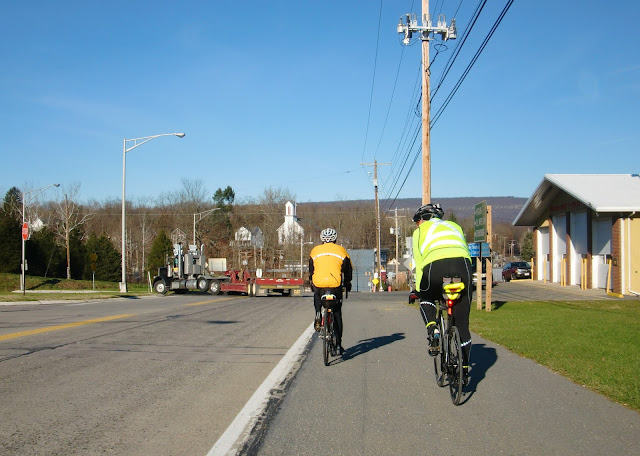 The mid-morning sun starts to warm the day, if only by comparison. Len and I have a quick snack in the rays before walking across the bridge. Roy H. and Geoff arrive before we leave. Seeing Geoff this "late" into a ride makes me wonder if he got a late start, or just gave the field a head start. It would be the last time I see him that day. He would pass everyone to become first finisher.

Roy kept his stop short and joined Len and me when we resumed.  Together, we rode over some roads that were like butter- though it made Roy think of soft ice cream - and some roads like that were wrinkled and crackly like crispy fried bacon. Once again, overall, the road selection for the route put on us car commercial roads. You know those roads, they are the ones you that see on car commercials, rollers and soft turns through scenic vistas, no apparent residents and apparently no traffic lights. Being able to ride those kind of roads is one of the things that keeps me coming back. 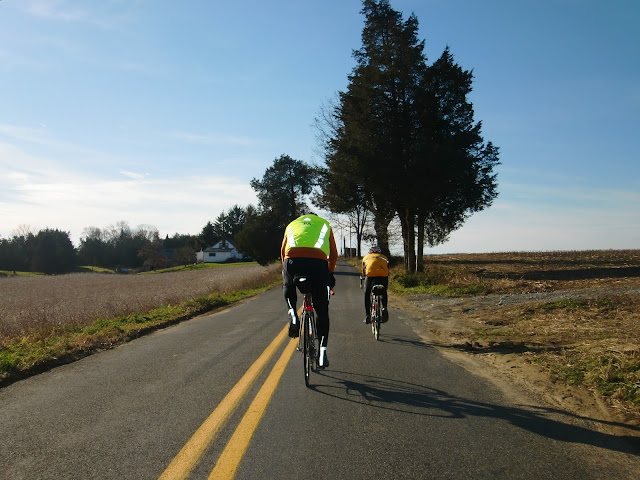 The conversation to the third controle flows in an untraceable stream of consciousness, ebbing and flowing over hill and dale, wind blown observations dispersing over barren fields and pooling in the clusters of straightaways. Mitochondrial DNA fused in the cellular primordial soup with the maternal double helix powers thought experiments of trees battling a prolonged winter, eager to burst at the first sign of spring and unusual politics as usual. 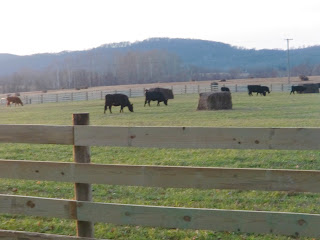 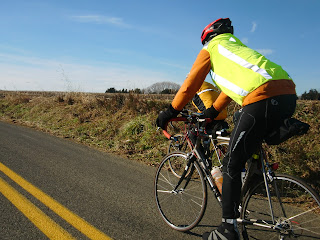 Keith S. who is volunteering for the ride, checks us in at the third controle, mile 71, in Lafayette NJ. It is lunchtime and we have lunch, even sitting down at a table to eat. We have been riding a good pace on an overall incline and I relish the opportunity to refuel.

As we prepare to remount, Len mentions that we may have enough time left to finish the ride in day light.  Oh oh. I think of the Flatbread 200 (link) and decline the offer. The big climbs are yet to come and I promised myself no sufferfest.

We ride together to the fourth controle. Well, almost together. I backed off the pace on a climb somewhere before it and fell of the back of the group. We met up at the control.

I arrived at the Shell mini-mart thinking of hot coffee and consuming more calories. Len and Roy were being efficient. When they were ready to leave Len offered me the opportunity to go with them. He described the course as 30 miles to go and about 2 hours and 15 minutes of daylight left.

Although its only 30 miles,  I know that two significant climbs, including tunnel road, lie ahead. I decline the offer. They take off. Guy Harris, riding a fixie, shows up shortly after they leave. He efficiently leaves in minutes. I, on the other hand, have a seat on the bench, enjoy my coffee and a muffin, refill my bottles and happily commit myself to arriving at the last control in the dark. 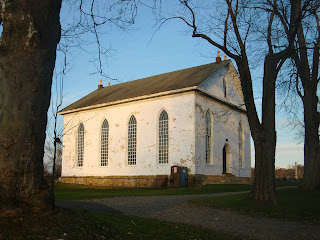 I wanted to get to Tunnel Road before dark. I did that. About 40 minutes later, when I finished climbing tunnel road at a slow methodical road slug pace, it was dark - dark enough for Joe F.'s lights to light my path as he passed me on the hill, followed shortly by Bill O.

The reward for climbing Tunnel Road is a long sweet descent. Not a screaming brake burner but a long fast run to Milford. If I pedaled at all in those final miles, it was momentarily.

The final control was Pizza.  As I sat down for a slice or three riders converged at the location. Ron and Barbara rolled in on their tandem finishing their third consecutive R12. Doug came in finishing his R12. Rick whose accomplishments in Randonnuering are too numerous for one paragraph in a post, made it through on the fat tired sand bike accompanied by Tom. 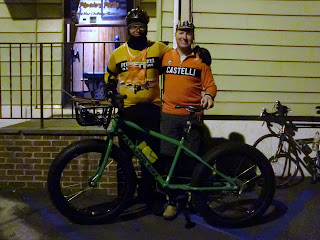 Ron, Barb and Rick met me at the Ship Inn microbrewery for a post-ride recovery beverage beer. There I sat, sipping the cool tickling bubbles, enjoying the stories and accomplishing my goal.