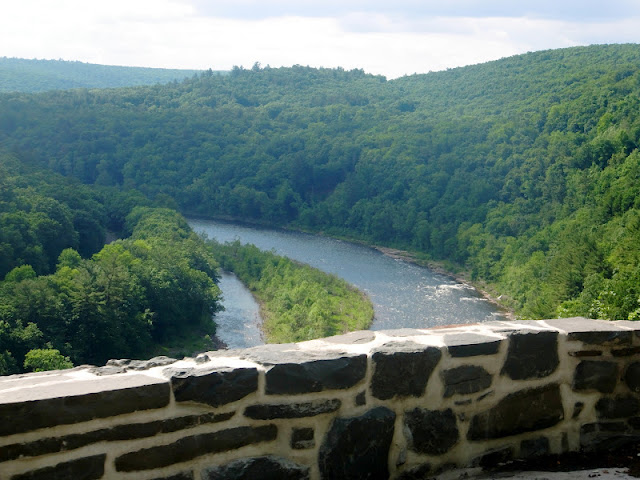 There once was a bike ride through Limerick

It is about 9:00 a.m. on Saturday morning and I think that I am finally, completely, awake. Yes - the ride started at 4:00 a.m. Yes - five hours later, the sun is up, over 60 miles have gone by and Yes - I have already gone through two of the ten on course controls. But here and now, reality has set in. I am here. Now.

Finishing it would be no easy trick

Until now, bits of limericks sprinkled my thoughts. You see, each of the 20 riders received a post card at the beginning of the 600K. One of the controls was a post office in Limerick, PA. We were to mail the card from the Limerick Post Office to prove that we made it that far.
Then, just before we started, Tom, the RBA, asked us to write a limerick on the card before we mailed it. I hadn't thought about limericks in years. In fact, I only know the first part of one limerick, "There once was a man from Nantucket . . ." Hmm, a writing challenge in the midst of a brevet, this would be interesting.

Paul S. (from PA not Paul S. from NJ) returned with his fixed gear bike to ride the 600k. In the first hours of the ride, our paces kinda sorta matched. As a result, we rode together and apart and together and apart for most of the course leading to the 20 mile climb. Turns out Paul knows a bit about limericks. So after a quick course in limerical rhyme and meter, I tried to think of rhyming words while riding out of the wee small hours of the first morning.
There once was a man from Brazil
He rode his bike up a hill
He went down so fast
His brakes didn't last
so as far we know he's going still
Night riding is not my favorite. I like scenery. Luckily, an almost full moon blanketed the world in cool gray light and in June dawn comes early - appearing like a reverse Cheshire cat. I waited with patience for the world to turn.
The rising sun warms. Mist rises from black top. The spirit of last night's torrential storms appears to reluctantly leave the earth for the sky. 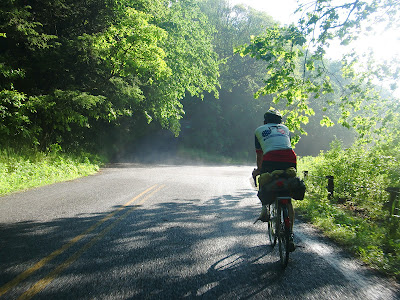 The course is more than just climbing. We wheel through the Poconos. We use our machines to explore. We take the measure of the face of the earth. 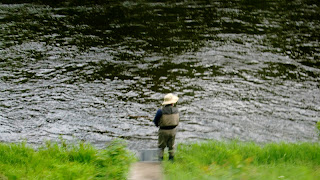 Hawk's Nest is a section of Route 97 in Deerpark, NY, that overlooks the Delaware River. I approach it from the level of the river, riding past fishermen, canoeists and weekend float trippers. The river is real, its sound and might within reach.
I climb 97 to reach Hawk's Nest. From the overlook, the river is now a distant back drop, an item of scenery, silent and picturesque. Climbing every inch of the mountain under my own power gives me more than a panoramic view. I feel the pitch of the climb in my legs. I feel its height in my lungs. The view from the top is not a given, it must be won. 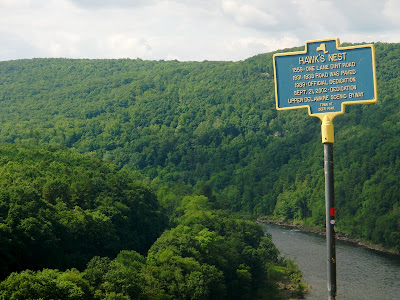 Just ride through the night 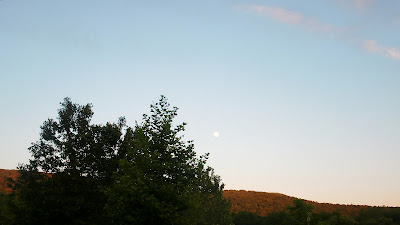 My plan for the day is patience and efficiency, get through the first 400k with energy to spare for tomorrow. The cost of the plan is solitude. As the day progresses, I ride by myself more often.

The moon rises before sunset. Then, as Bob Dylan sang, "the evening shadows and the stars appear." The moon will be my companion tonight. I cross the bridge into Pennsylvania. Moonlight sparkles on the tips of the water. 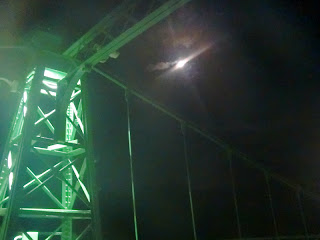 Night riding is not my favorite, much less so when it is solo. But the watchful moon is bright and constant and, since I have no purple crayon, I move from cue to cue, practicing patience and efficiency, and thinking up possible limericks.
A man rode his bike to the ocean
drinking only a homemade potion
imagine his surprise
when he saw with his own eyes
that instead of urine he peed lotion.
I want to get to the sleep stop with enough time stored up to sleep for a couple or three hours. But riding the hills at night eats into my time cushion. I weigh the thought of riding straight through the 600 without sleep. Others have done it before, and my conservative pace makes doing that a possibility. But I had started the ride on only four hours sleep because of the raging storms that fell last night and riding solo through the full night seems a lot to ask.
Then, less than 10 miles from the hostel where food and a bed were waiting, I miss a turn.  A good half hour lost on bonus miles. That is not efficient. I need to rest.
I reach the hostel. Once again, I am thankful for the volunteers manning the controls as they guide me through the process in a quick and easy manner. We talk a bit, but I quickly eat first, then shower. Then and there I decide that I will not go back into the night. I ask for a 5:00 a.m. wake up call. That should get me back on the road just at sunrise.
Assigned to a bunk, I am asleep in minutes and take a coffee nap to clear my head. I awake to find out that two riders will end their ride at the hostel. Several others, who arrived before me, will be departing at the same time.

And into wind that makes your bike feel like a brick

Last year, after waking from the rest stop at my one prior 600k (in NJ) my rando friend Katie sent me on my way with the reminder that "Its only a 200k now - You can do that!"
I remember that line as I head out for the last third of the ride. This 200K section is basically an out and back course - west toward Lancaster for about 65 miles and then east back to the Hostel. 200K - I can do that.
After mailing our post cards from Limerick, five of us eat breakfast at the Limerick Diner. Then we head out west.

A steady wind blows from the west. A steady headwind to match the steady climbing going west. The headwind and the hills soon consume my breakfast energy. I slog toward the control. Dragging myself into the halfway point, efficiency meant eating and drinking a lot. So that is what I did.
Eric K. and I leave the control together. On the return trip, I experience for the first time the magic of a true tailwind. Riding a bicycle has always meant some wind noise. With the hard wind behind me, the wind noise stops - completely. It was as if someone  pressed the mute button on the surroundings. Yard art wind vanes spin furiously in silence. Long grasses bend and wave to point in our direction of travel with no accompanying whistle. I can hear the smallest sounds. The zippering kiss of tire on asphalt. Bird songs. And the push was like having an engine. I am sailing my bike.

Question: What happens when two men of a certain age who've been riding a bike for the better part of two days, for over three hundred miles, meet up with two teenage Amish boys in long sleeve white shirts riding big Amish bikes in the same direction?
Answer: They race. (At least they do when the men have a tailwind and full stomachs)