Sometimes a brevet is just a bike ride from then to now to next. Stillwater Retour 200K

Two weeks after riding around Lake Ontario, the recovery is well underway. Now, in between family and work, comes the thinking about, and preparing for, the next big thing, the farthest ride yet that is now just two months away. One thing about randonneuring, there is always another big thing.

Since the last big thing, after the three days it takes for my foggy mind to recover, during the two weeks it takes for the body to recover, I've been cross training a little. But, to prepare for a big brevet, you have to ride the bike. Luckily, sometimes, a brevet is just a bike ride. 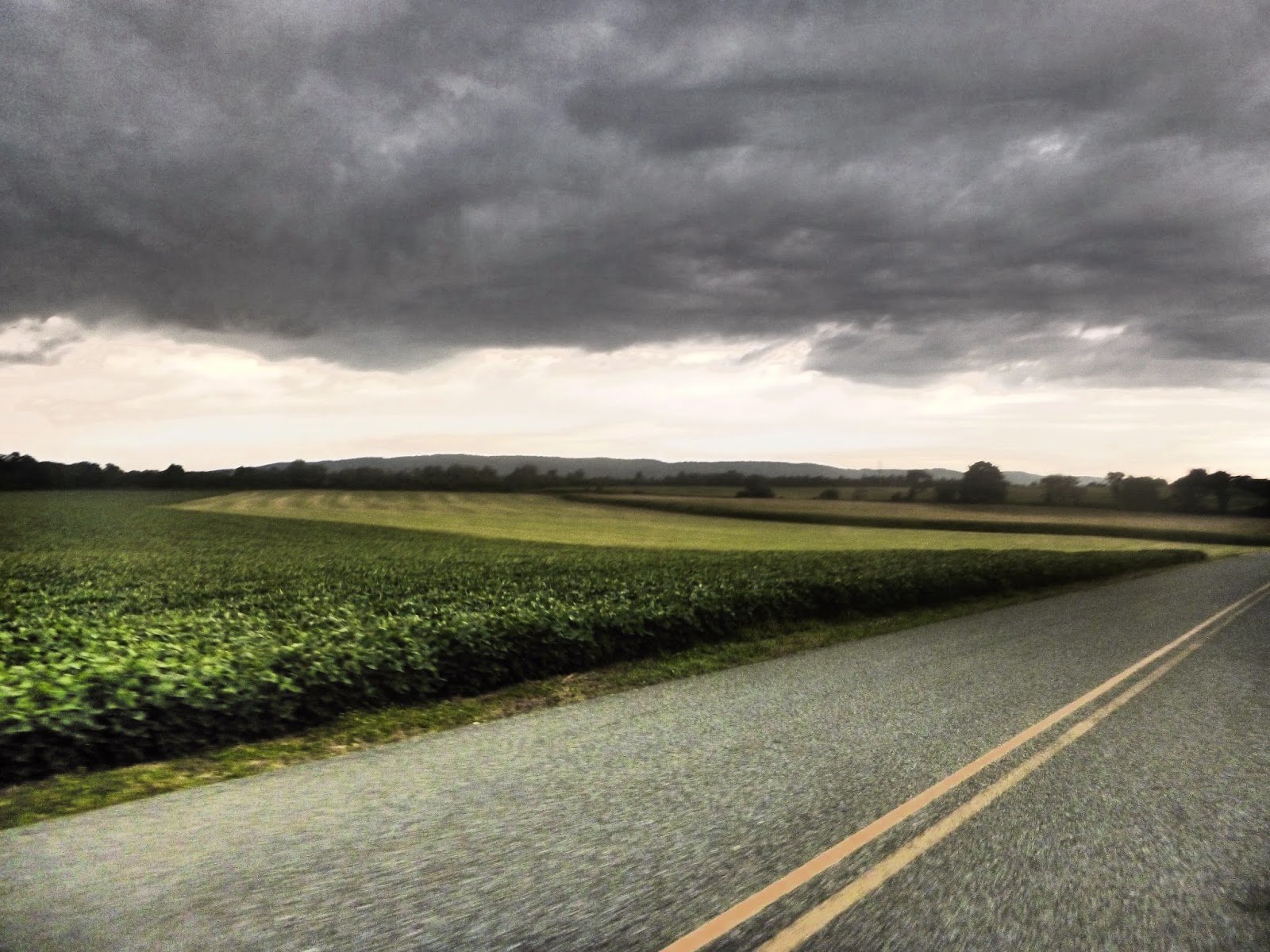 On Saturday July 26, The Pennsylvania Randonneurs held the Retour du Sweetwater 200K. 125 miles of riding starting in Milford, NJ, running  parallel to the Delaware River. The course trends up in elevation for the first eighty miles then dips before each of the two big climbs that come just before a six or seven mile down hill run to the finish.

At the 7:00 am start, suspended columns of foggy mist lingering above the Delaware River link the low hanging clouds of the overcast sky to their reflection in the tranquil water.  A hint of humidity, a touch of cool and a suggestion of rain mingle in the air like the droplets floating above the river. The atmosphere seemed paused in the transition from then to now to next.

In the early light of the day, outside the bakery housed in the converted train station, the bright colors worn by the gathering riders stand in sharp contrast to the muted tones of deep summer green and earthy browns. Many of the Pennsylvania regulars, seasoned riders with accolades that hold their own with any group of Randos anywhere, were there. As always, they were as warm and welcoming in their greetings as they were understated in discussing their recent accomplishments.


How was that 1200K Mile Failte in Italy? I heard it was tough?- Yeah, you could say that.


Congrats on that 1000K! Recovered yet?- Guess we'll find out today!


Heard you had a bit of a rough go on the Rocky Mountain 1200K.- Yup, after riding more than half, my rear wheel failed but then I volunteered to support the rest of the riders. That was fun.

The pre-ride meeting is brief. After  few words we are off, riding into the surprisingly cool damp of a July Summer morning.

I have no plan other than to limit times at controles - to practice banking times for longer rides to come - and to ride the road in front of me because right here, right now, that is all I need to do.

The 25 riders split into smaller groups over the early rollers along the Delaware river. The first finishers, the climbers, pull off the front. I ride with those who take more time at the outset of the day.

The morning coolness lingers. In its protective embrace, I push the pace to take advantage of the respite from the Summer heat. The line stretches and then, gradually, I am off riding solo in the all too familiar between place of randonneuring, between groups, between the beginning and the end, alone on a road where others also ride, the place where we all live.

I catch up with Bill O. At the next controle, we catch up with Eoghan from Princeton NJ,  by way of Ireland, who rode his bike to the start and would ride home. He joined us for most of the rest of our journey.

We ride through the glory that is the land of the Delaware valley. Verdant farms, quiet roads, simple unpretentious towns, hidden lakes, kestrels, eagle nests, llama farms and views of the remnants of once colossal peaks that make up the Kittatinny Mountains. The ancient beauty of this place surrounds and permeates our experience.

In this peaceful setting, Bill shares stories of his mother's illness which is bringing her life's journey to an end. For a while, we talk of living and dying. I think of those now gone whose presence I will always miss and our own brief time on these roads we travel.

And then, somewhere along the road, I find that place. That point of balance, where I am capable of all that I wish to do, where I ride without struggle, without worry, without regret or weakness, without thought of what comes next or what has gone by. That fleeting memorable place of purity, that place of here and now.


“Child, child, have patience and belief, for life is many days, and each present hour will pass away. Son, son, you have been mad and drunken, furious and wild, filled with hatred and despair, and all the dark confusions of the soul - but so have we. You found the earth too great for your one life, you found your brain and sinew smaller than the hunger and desire that fed on them - but it has been this way with all men. You have stumbled on in darkness, you have been pulled in opposite directions, you have faltered, you have missed the way, but, child, this is the chronicle of the earth. And now, because you have known madness and despair, and because you will grow desperate again before you come to evening, we who have stormed the ramparts of the furious earth and been hurled back, we who have been maddened by the unknowable and bitter mystery of love, we who have hungered after fame and savored all of life, the tumult, pain, and frenzy, and now sit quietly by our windows watching all that henceforth never more shall touch us - we call upon you to take heart, for we can swear to you that these things pass.”

I took some pictures. You can see them here.