76 miles into the ride, I got my mojo back. Finally. On a category 5 climb deep in the Poconos, it emerged to lift me just above the discomfort and effort of riding brevets. No longer did that aspect dominate my thoughts. It took a while to get there, but I got there. Now I could just ride. 50 miles to go. 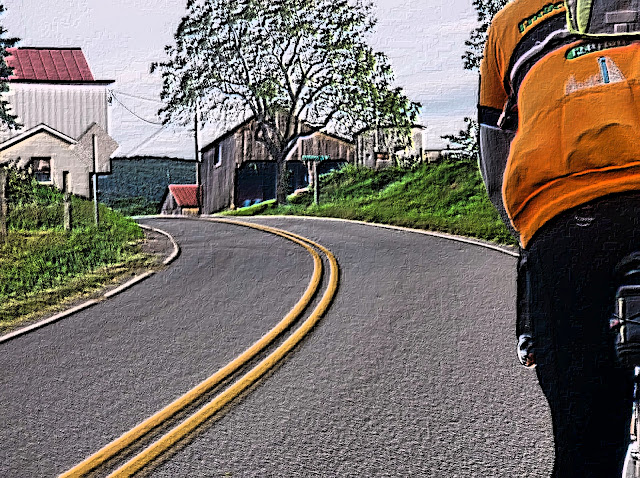 "The Delaware winds through a picturesque mountain,
where the forests abound with game and the streams with fish."
Zane Grey


Just past dawn, Randonneurs began gathering for the Hawk's Nest Brevet outside of the Water Gap Diner in Delaware Water Gap, Pennsylvania. The diner was supposed to open at 6 a.m. At 6:15, it was still closed. A couple of the diner's regulars good-naturedly waited outside the locked doors for the late-running employees. Our brevet organizer, Bill O., had set out the sign up sheet and brevet cards on folding table. Tom R., the Pennsylvania Regional Brevet Administrator, was there, as were a few others. I followed Tom’s directions down the block and around the corner to the parking lot and got my act together.

The diner opened. We filed in. Breakfast orders ensued and more riders arrived. I sat next to Don J. He warmed his hands around a white ceramic cup of hot coffee. Black arm warmers covered the area from his short sleeves to his wrists. He was chilled. That seemed odd. I didn’t think it was that cold. Then I learned that he rode his bike 45 miles to the start of the 200k and would get home the same way. The local pre-dawn temperature was probably in the 50’s. That would explain it. Suddenly, my 4 a.m. wake- up and early morning drive seemed far less noteworthy.

The Hawk’s Nest 200K was taking place the weekend before the PBP; that quadrennial event where Randonneurs from around the word converge in France to ride 1240 kilometers - from Paris to Brest and back. Here, in the comfortable, utilitarian pastel decor of the diner, talk of the PBP, past and pending, wafted over the counter like the light morning fog that lingered in the surrounding Pocono Mountains. Chris N. is heading for Paris as is Roy Y. Jud went in 2007. Tom went in 2003. There were stories to be shared and the anticipation of the stories to be made.

After breakfast, Bill gave the pre-ride briefing. I listen for mileage references. Most everything else is lost on me because I have not ridden this route before. Plus, in all honesty, I just plan to follow the cue sheet and deal with whatever comes up. What does catch my attention is that a RAAM finisher is joining us. Geoff Brunner completed this year's Ride Across America, over 3000 miles, in 12 days. That's an average of 250 miles a day. I don't imagine this will be more than an easy day for him.

From my pre-ride route mapping, I know that 5 of the 10 mapmyride categorized climbs come in the first 30 miles of the course. The first, a category 5, comes just two miles in, followed by a cat 4 at 4.6 miles, another cat 4 at 19.2 and two more cat 5's between miles 22 and 29. That amounts to 9.25 miles of categorized climbing before the second control. That does not include the hills that lead to those climbs.

So when Bill says not to worry if we reach the controle near the closing time, I wonder if he can tell that I'm worrying if I'll get there before the closing time. Tom also tells me that, despite the hills, this is a fast course and to expect to have one of my better finish times. I take his advice with a grain of salt - after all he is an RBA and they are known to have suspect memories when it comes to difficulty. Nevertheless, from my recent "fast" 70 miler with Len Z., I have confidence that I can push hard for 70 miles, so I decide to ride at a much harder effort than has been my practice through the second controle. If that doesn't work, and I DQ at the second controle, at least the trip back to the diner will be mostly downhill . . .

We roll out onto the course, heading north toward Promised Land. The hills soon sort the group. By the time the first Cat 4 climb comes along, I am riding with Tom R. and Chris N. We'd been having quite a nice conversation, but when the hill came I had to stop talking and breathe. My heart rate monitor, set for 85% of max, chirped occasionally and I eased up just enough to stop the beeping. Chris and Tom began to pull away, then my chain broke. It spooled off the cassette and lay on pavement like a dead robotic snake. A mechanical on the toughest overall section of the course, when I had no time banked before the next control! I believe the technical expression for that situation is "OH SHIT!"

The chain separated at the connex link. I carry two spares. I fished them from the front of my handlebar bag and began the process of threading the chain through the drive chain and connecting the links while trying to stay calm through the sound of my mid climb panting. I missed the first attempt when the chain pretzeled itself. Unthread and start again. The third time they linked. I remounted and crested the hill. No one was in sight. I resumed a solo trip to Promised Land.

The “Shakers" tried to settle this region in 1878. They were a dissenting Quaker church that called itself the United Society of Believers in Christ's Second Appearing. The Shakers became known for their architecture, crafts, and furniture. Shaker design marries form and function to embody the Shaker credo: "Beauty rests on utility." They arrived in the Poconos with high expectations for riches from the wilderness, but ended up with rocky, wet soil that could barely be farmed. They soon departed but not before they had, with tongue and cheek, named the area “The Promised Land.”

On the way to the second control, I ride through Promise Land State Park. This park has been a public resource since 1905. Over 10,000 acres of park and state forest encompass two lakes. Along the road, I pass cabins and boats and outdoor recreation all just a few hours from NY City and Philadelphia. In searching for the riches hidden in the wilderness, the Shakers may have overlooked the richness of the wilderness. One person's sarcasm can be another person's truth.

I hear voices behind me. "I bet you thought you could be last?" It's Chris and Tom. They found some bonus miles to ride between our separation and the second controle and ended up behind me. Chris joked that that is what happens when you rely on the RBA instead of the cue sheet for directions. It was good to have company again.

Despite the missteps, we arrive at the second controle with time to spare. Tom got there first and left first. Chris and I arrive together, but I left before he did, saying "you’ll catch up."

The course is fast after the second controle. Thirty miles of downhill that easily adds 2-3 mph to your speed. We ride along the shore of Lake Wallenpaupack toward the NY border passing the Zane Grey Museum. Zane Grey used to be a NY City dentist. In 1905, Zane Grey left dentistry to pursue writing full-time. He settled into a farmhouse overlooking the junction of the Lackawaxen and Delaware rivers. He wrote one of most well known works, Riders of the Purple Sage, while he lived there. One day, I will actually go into that museum.

Chris does catch up. His fitness for the PBP is evident even on a ride that he is taking easy. It was good to have company again. He points out the Roebling Bridge and clues me in to its significance. That leads to my Brooklyn Bridge bike stories. Which leads to his bike stories. So we trade stories back and forth.

The third controle is between the next two category 5 climbs. Chris pulled ahead on the climb. I met Tom and him at the controle. Roy and Evan were leaving as I arrived. Bill was there also. This time I took a longer break. I needed calories, in the form of French fries, before moving on to the next climb; especially since I could see it from the restaurant window.

Riding through New York toward Port Jervis, I got intermittent bouts of leg cramps. Luckily, I had my container of apple cider vinegar and with a tablespoon size swig the cramps disappear instantly. I don't know why it works so fast or so well, but I am glad that it does.

At the penultimate controle I caught up with Chris and Tom. I had my mojo back. The folks in the diner, one behind the counter and two on stools, gave me a friendly greeting. In response to the questions about the ride distance, I explained that we were clearly crazy. Then when one of the guys said I looked more like I should be starting for the Giants than riding a bike that far, I responded that’s because I was even crazier than the rest.

Time to finish the ride.

The last big climb is Mine Road. I experienced it once before, on the 300k. This time it came at mile 111. If a road can be mean and nasty, it is Old Mine Road. If Old Mine Road were a person, it would be a tough as nails old codger who screams at kids to "Git OFF MY LAWN!!" and keeps their errant toys. It is a pot holed climb from the river Styx out of the Valley of Death that defies you to ride in a rhythm or even a straight line. And just when you think you've climbed it you discover the sharp turn that hides the steeper rest of the climb. I dared not look back lest I turn into a pillar of salt. I must admit, I walked a good section of Old Mine Road. It was either that or take a nap until I was recovered enough to ride it (I know someone who did that on the 300k).

Getting back to the diner, I discovered that some of guys were still there, so I joined them for a meal. I also realized that I just rode my fastest 200k to date, despite the hills and cramps and Old Mine Road. Tom was right, this is a fast course. I guess the land held some promise after all.

And last, but not least, to my friends in Paris and Alaska, enjoy your trip through your promised land. You've earned its richness. I look forward to hearing your stories.