The first hours of the brevet felt timeless - nether morning nor afternoon, neither hot nor cold - a space between moments. Under a covering of mottled gray clouds, we rode through shadowless terrain. The flora, plump from recent torrential rains, could barely contain their color. Yellows, oranges and greens brightly popped against the muted background. This was Summer's last Saturday, but I felt the touch of Fall. Cool air drew excess heat away from laboring muscles, leaving just enough warmth, like a thin flowing shield, to ward off the chill. With the threat of overheating gone, this would be a good day to climb mountains and this brevet would provide just the course. 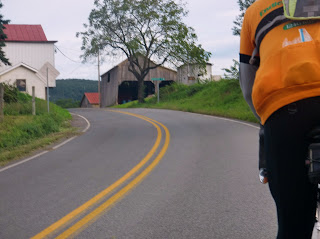 The Hawk Mountain brevet would be the first local brevet held after the Summer's 1200k Grand Randonnees. In the last month, riders completed 750 mile rides in Alaska, North Carolina and, of course, the PBP. Local riders completed each of the three and some of those Randonneurs would ride today's brevet.  Rick C. rode Alaska, Don J. rode North Carolina,  Bill O. rode BOTH, Chris N. and Joe F. rode PBP. As we gathered in the parking lot for the start, we congratulated the riders and the stories began. 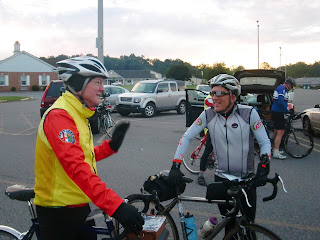 After brief pre-ride instructions, we rolled out onto the route. The variety of bikes for this brevet included Rick's fixed Bianchi - with no water bottles, a Brompton ridden by Peter from New York, and three Surly Long Haul Truckers - not the expected selections for a climb filled route. 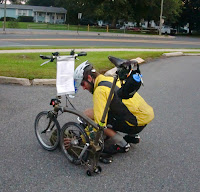 In July, I soloed this route as a permanent. This time, the company of riders made for a very different experience.

The give and take of group riding replaced the solitary reverie of a solo trip. At various points, and for differing lengths of time, I rode with a different members from the group, sometimes leading,sometimes following and often side by side. 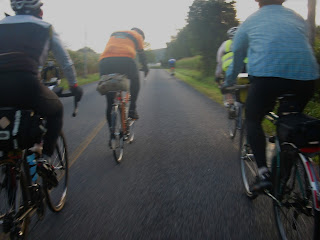 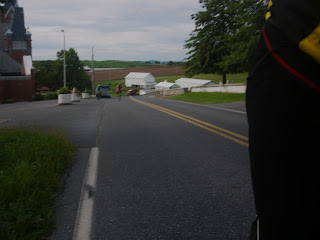 The route to the second control is a series of rolling hills. That kind of terrain, plus a course change that took out the climb at Cushion Peak, led to my riding with a larger group of riders for a good portion of the 47 miles to the second control. It also helped (me at least) that a fast group, which was pulling away, rode right past the non-existing traffic light at S. Church Road, instead of turning left at the sign. Luckily,I caught up with Len Z. just as he was realizing that the cue sheet indicated a traffic light where there was none. As a result, he, Joe and I turned about with only about one bonus mile, while the larger group riding ahead continued to follow the leader off-course. They'd figure it out. Eventually, I'd see them again.

Back on course, we later caught up with Chris and Tom. They did not miss the turn. Apparently,in the process of revising the cue sheet to address flood damaged roads, a "TFL" cue worked its way in front of S. Church Road. Time for another revision.

The second control lies just before the Hawk Mountain climb. It made a good place to regroup and refuel before taking on the two miles of steep. Going up Hawk Mountain is where I would get my money's worth from this ride. I left a bit early to give myself a head start. 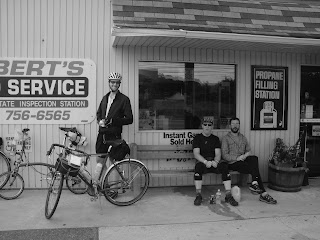 I stopped on route to pack my jacket into a bag. Peter from NYCE Wheels riding his Brompton, rolled up on his 16 inch wheels. I have considered riding a brevet on my Brompton, but certainly not Hawk Mountain, or actually, no brevet with the word Mountain in its title.

This was Peter's first brevet. We stayed together until the base of the climb. At which point he proceeded to glide up as if on some secret escalator for which I could not find the entrance. I could see why he came in second in this year's Brompton National Championship. 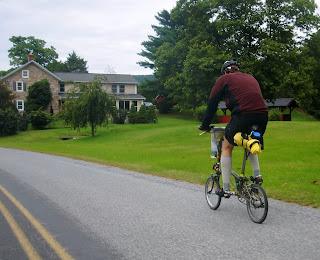 Rick passed me next - on his fixed bike. One gear, steadily climbing.

Don J. and Bill O. found the escalator entrance too, and I watched them gap me toward the summit.

Chris was my next companion on the way to the top.  We approached the peak together, riding that cruel final stretch that pitches even steeper. A man dressed as a Hawk, holding a rubber rat, was flapping his wings at the entrance to the Hawk Mountain Sanctuary. We took his picture. Here it is. That's all I have to say about that. 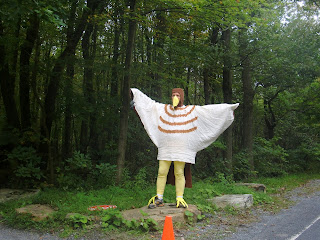 The reward for climbing Hawk Mountain is the ride down the other side. I tried to follow Bill and Don as they seemingly went on a no holds barred descent but, at about 40 mph or so, my brakes kept intermittently applying themselves as I tried to negotiate the turns on the two-way road. Worse yet, my brakes squealed. One would hope that such brakes, which would not allow me to go careening headlong down the side of a mountain, would also be circumspect enough not to loudly announce to the world my specific points of pucker. Well, at least the noise seemed to keep the deer and squirrels from darting across my path - which I'm convinced they were ready to do.

After Hawk Mountain, the course begins to roller coaster. Up, down and repeat- for 33 miles. Along the way, the roads carry evidence of the recent floods. Downed trees, damaged bridges, evidence of high water marks line the areas above creeks and streams. For the first time, I see a through-hiker on the Appalachian Trail. He tells us that he has been on the trail since June and is heading toward Georgia. What a feat of endurance.

Rick and Tom R. ride up to Chris and I as we correct a missed turn. Not carrying water bottles meant that Rick had to stop for water at the Hawk Mountain Sanctuary. As the group moved forward, my thighs gave me the same sensation I get when I try to drink from an empty Camelbak - useless and slightly desperate - then I started to cramp. I was starting to bonk from the distance, the climb, and the too short break at control 2.  They pulled away as I began my emergency Fig Newton protocol - two Fig Newtons every 15 minutes with water. I soloed the rest of that stretch, ignoring the intense lack of motivation that happens when your brain and body need carbohydrates.

The third control at Turkey Hill brings relief in the form of food and drink. Chris and Tom are there completing their break. I refuel and regroup.Two hard-boiled eggs hit the spot. Then I hit the road. 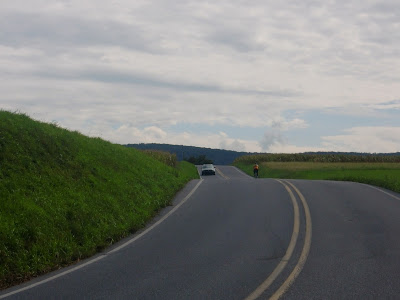 15 miles to the next control. Full recovery from the mini-bonk does not happen in one rest stop, but I continue, climbing the next series of rollers, sometimes in the granny gear, but continuing. This time I have company as Chris and I ride together for a good part of the section, leapfrogging with Tom. Having company makes a big difference. We travel through through small towns with wood houses that are stacked side by side in the midst of farmland. 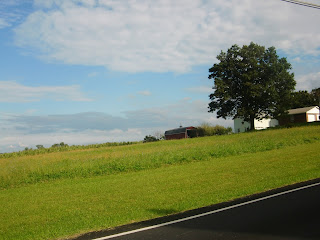 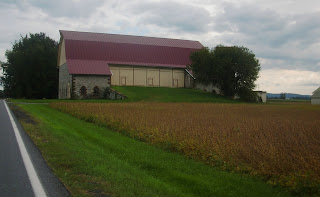 Tom, Chris and I meet up at the fourth Control. Tom's role as Pennsylvania RBA seems to have him making phone calls and tracking riders. Chris, on his first post PBP ride, is taking it easy and enjoys a cup of coffee. After while, I leave with the expectation that we will meet on the road as I make my way toward completing the course.
The last thirty miles transition from the edge of the mountain range into the farmland of Lancaster County. The mid-afternoon sun burned off the cloud cover but the temperature remained cool.  The weather for the day may have just about perfect for randonneuring. 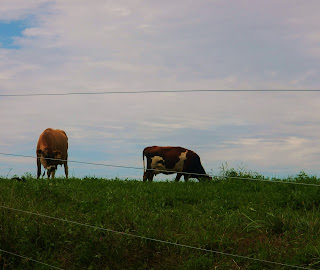 Evidence of the recent rains also appears here. Water ponds over saturated soil to the edge of the road. I ride into the last control motivated by a self-imposed time goal and fueled by a ongoing supply of Gatorade and Fig Newtons.

Andrew, the course organizer, waits at the last control. Tom checks in few minutes behind me, followed closely by Chris. I am glad that the day ends similarly to the way it started, with a group of riders enjoying the camaraderie of the sport.